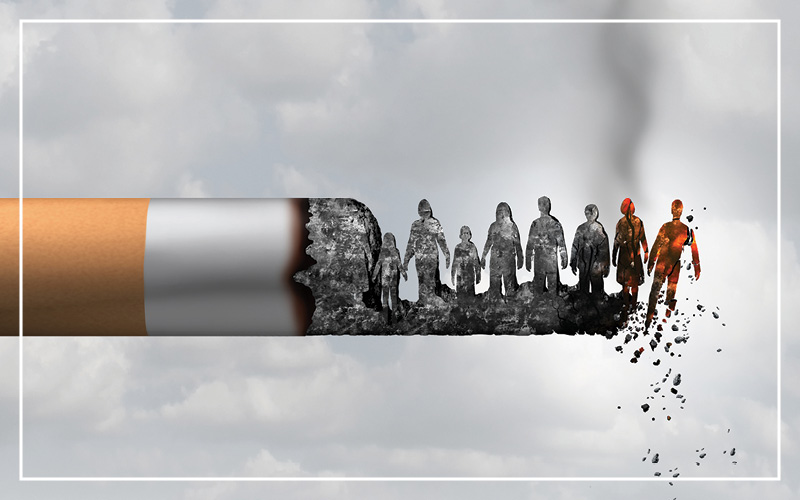 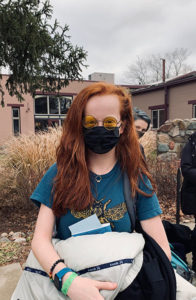 A few weeks ago, I was asked to do a big essay on any topic that I chose. I picked “tobacco products and how they affect your health.” I learned about the many horrors that happen to our bodies and how people don’t care what tobacco products do to them but are more concerned about how they make them feel.

When I was researching, I figured out that one cigarette produces 7,000 chemicals in its smoke. In addition, many people die from simply inhaling the smoke, even when they aren’t the actual smokers or vapers. Vaping (also called e-cigarettes) is a newer invention from the tobacco industries. E-cigarettes can be disguised as USB cards and have about 800 flavors, and to some people, they are a lot more fashionable.

The start of the fable, featuring Alora

When Alora was younger, about thirteen years ago, they lit their first cigarette out of peer pressure. Almost all of Alora’s friends were smoking and vaping at a party. So, Alora said something along the lines of, “Oh well, it’s only one. It won’t make me addicted.” After that day, Alora kept on smoking, telling themself the same lie that every teenager tells themselves—that they’re able to quit any time they want.

The truth is that the first time a tobacco product touches your lips, depending on what product you use and even if only for a couple of minutes or hours, the nicotine goes into your blood system. Alora is one out of millions of kids who made this mistake. With more use, Alora became breathless more quickly during gym class. But Alora kept on telling that lie that they could quit, just to avoid the realization that they were addicted to e-cigarettes. Alora’s friends “helped out” by teaching Alora how to sneak e-cigarettes (shaped like a USBs) into school.

Along with taking that first puff and becoming breathless during PE, Alora lost friends. Alora’s best friend, Gregory, had a dislike for tobacco products, but Alora couldn’t help but to keep vaping. After some time, Alora started to hang out with other vapers and smokers and Alora’s friendship with Gregory slowly grew distant because of Alora’s vaping.

When Alora went to college, it got worse, and Alora noticed the longer they vaped the more nicotine they needed in the e-cigarette. When Alora tried to quit, Alora had to pay for a therapist, a support group, and gum, and it all cost a lot of money. It cost so much, Alora decided that even though they were probably going to get diseases from all the chemicals, poisons, and toxins they were putting in their body, Alora would continue to vape because it was cheaper. Then, when Alora was invited to a friends’ wedding, Alora had to go outside during the dinner to fulfill the craving for nicotine and tobacco. Alora missed out on a lot of things because of an addiction to tobacco.

So many people are like Alora. No matter what tobacco product people use, they lose their friends because they miss out on things to fill the craving. There are 443,000 people who die each year from cigarettes. That’s more than AIDS, alcohol, illegal drug use, homicide, suicide, and motor vehicle crashes combined!!! This is a very important subject, and doctors and specialists recommend not making the same mistake that Alora and so many other people make. If you want to smoke or vape, just sit with the decision and wait for a bit. Then, consider all the problems you will have if you pick up that cigarette or e-cigarette. No good comes from saying yes and being addicted to these products.

I hope you learned something from the article. If you ever consider smoking, your friends and family hope you make the right choice by saying no.

Your story about tobacco is quite remarkable. You have seamlessly woven in information about the public health concerns associated with tobacco consumption with a personal narrative documenting the implications of smoking for Alora. Through your story, you document how these powerful companies are able to leverage peer pressure and camouflaging of their packaging (e.g., e-cigarette products disguised as USB drives) to increase addiction among younger generations. Alora unfortunately succumbed to these temptations and increasingly missed out in a lot of the joys of youth. Successful public health campaigns, as noted by Bill Gates in his work through the Bill & Melinda Gates Foundation, are most effective when they are personalized. Instead of telling people simply “the numbers”, you have instinctively chosen to rely on a personal narrative – Alora’s story.

Brenna, I believe you too have a distinct personal narrative.

Trust your strength, trust your vision, and continue to inspire us.